We love our new promotional video and I think you will too!

Our journey from Austria to France for World Cup 3 was a day that will live in US Biathlon infamy. Thanks to a blizzard, our 8.5-hour drive turned into almost 16 hours and concluded with the whole team pushing the van up the driveway to our rental house at midnight. Worst of all, we were under a time constraint to get to the Mont Blanc tunnel before a scheduled closure, so we only stopped twice the whole day for quick snacks and a bathroom break. Getting enough food is one of my biggest challenges so this was a major setback. I started coming down with a cold the next evening.

Two days later, fighting the cold, I slogged through the sprint, missing 3 targets and placing 81st. It was my worst result in a few years. My teammate Susan, on the other hand, who had struggled mightily on the shooting range at World Cups 1 and 2, accomplished a heroic biathlon turnaround by shooting clean to place 10th. We were all ecstatic for her.

Joining me in the disappointing-race club was my other teammate Emily, who also missed 3 and finished in the 80’s. Neither of us would be moving on to the pursuit race. Time to pack our bags and head home for Christmas.

It was in this moment that I technically clinched my Olympic Team spot. My 35th place from the sprint in Hochfilzen at World Cup 2 stood as the top result between Emily and me. Susan is pre-qualified for the Olympics. Emily would have to return to the 2nd-tier IBU Cup after Christmas to battle it out with other top women for the remaining three spots.

I felt anything but triumphant. I had just finished my worst race in years, I was leaving the first trimester of racing with fewer World Cup points than I’ve had in any other year, and I took zero pleasure in Emily’s bad race. I was sick and tired.

“If no one meets the automatic standard [30th place] before Christmas, then the team will be filled to a maximum of 2 people, [including pre-qualified athlete, Susan Dunklee]” based on best World Cup result. I had the Olympic Team qualification criteria memorized. And as I ran it through my head, I thought that, in fact, filling the team to “a maximum of two” does include the possibility of filling it to just one. Susan tried to give me a high five. I told her I wasn’t celebrating yet; I wanted to wait until I saw my name on an official press release. Our coaches and staff were focussed on the upcoming pursuit races and said nothing to me. If only I had hit my last shot in that sprint in Hochfilzen…

I had some special people watching on course that day: my parents and my unofficial host family from my semester abroad in Switzerland. I wish they all could have a seen a more beautiful race but I was glad to have them there nonetheless. After the race we all drank hot chocolate and spoke Frenglish together.

My parents came all the way to France only to watch me do one bad race. But their attendance soon served a greater purpose when they put me up in their hotel so I wouldn’t give my cold to my teammates. We watched the pursuit races together from the stands. It was an unfamiliar vantage point for me and a reminder that, in spite of all the frustration, I still prefer to be on the athlete’s side of the fence. Then we drove down to Geneva for the night, where my parents treated me to steak tartar, Glühwein, and a choir concert. It felt good to escape from the biathlon circus and plant my feet firmly in the real world.

The next morning, I woke up to messages and emails congratulating me on making the team. I read my name in the press release: “Clare Egan achieves Olympic Dream.” I still felt like I was in a biathlon nightmare. I knocked on my parents’ hotel room door and told them the news. Then I got on a plane and flew back to the U.S. early, a day before them.

There was no crossing the finish line in a blaze of glory, fists in the air, running into my coach’s arms, reaching to hug my mom in the stands. I think in a way I’m mourning the loss of that moment. I am trying to let go of the romantic vision I had about how anything pertaining to the Olympics is supposed to go or feel.

Three days, four phone interviews, and hundreds of congratulatory messages later, I am still struggling to reconcile acute near-term disappointment with totally overwhelming long-term achievement. It’s the thrill of victory and the agony of defeat all at once.

I finally let Susan congratulate me today. This will be her second Olympics; she narrowly missed making the team in 2010 and then pre-qualified in 2014 as the top American woman biathlete in history. “It’s a big emotional load, no matter how it falls,” she said. In 2014, when I asked Susan how she felt about qualifying for her first Olympics, she said “ready.” My emotions may be all over the place, but I can say with complete certainty that I am ready, too. 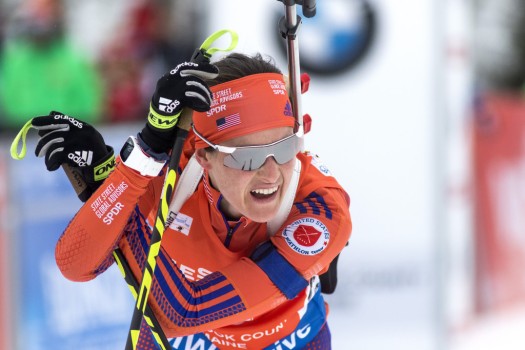 I felt unprepared, jet-lagged, sluggish, and consequently stressed. For better or for worse, our team always starts off slow and excels in February at the championship races. I’m confident that I’ll be in peak shape when it counts the most, but it’s still hard to overcome the early-season blow to my confidence. On the bright side, my shooting in training was excellent, and I felt better and better each race.

After almost two weeks in Sweden, we traveled to Hochfilzen, Austria. I was happy to return to one of my favorite hotels and the site of the magical 2017 World Championships. We traveled on a charter flight, which I always enjoy because it is one of the rare times when all the athletes come together in a non-competition atmosphere. I sat with Quentin Fillon-Maillet (FRA) on the plane and he was even chattier than me.

During the first few days in Hochfilzen we enjoyed a much-needed dose of sunshine. We also got out new uniforms!!! And I spent several hours rotating between the sauna, cold pond, steam room, and relaxing bed. I felt enormous gratitude for my lifestyle. My training continued to go really well, and with the help of our sports psychologist I worked hard to rebuild my confidence. Just in time for the Sprint race, it started dumping snow.

It was the crazy kind of weather that made me laugh during my warm-up, as I wondered, “how am I gonna see the #$% targets?!” The wind was gusting and I couldn’t see anything though my snow-caked glasses. But I’ve always done well in inclement weather and this was no exception. I shot 8/10 (missed 1 prone and 1 standing) and finished 35th, less than 10 seconds outside of my team’s top-30 automatic qualification standard for the Olympic Team. I had missed my last #$@ shot. Still, I was thrilled to have a good race under my belt, to have scored some World Cup points (top 40), and to have qualified for the pursuit race (top 60). Starting in 35th position in the next day’s pursuit would also put that top-30 standard well within my reach. To celebrate, I went to the main square to celebrate St. Nicholas Day with the locals.

The first lap of the pursuit I was right where I want to be. I felt relaxed skiing in a pack of super strong women. Then I didn’t adjust my sights correctly for the wind when I came into the first shooting and missed two. I didn’t lose hope. Then I missed two again on my second shooting. Still didn’t lose hope. Then I missed two more on my third shooting and lost hope. On my last shooting, I hit the first four and then missed my last #$% shot again. I did pass one person in a glorious charge up the final hill.

I slid back from 35th to 53rd place in the pursuit. But I left Austria relieved and satisfied, knowing 35th would likely be enough to earn me a spot on the Olympic Team. We were also given a case of mini-champagnes by a devoted fan, which didn’t hurt.